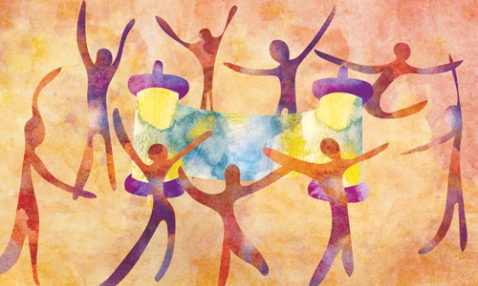 This week we celebrate the holiday of Lag B’Omer, which marks the celebration of the yahrzeit of Rebbe Shimon Bar Yochai, one of the greatest Tsaddikim and Sages from the time period of the Mishna.  It also marks the end of the mourning period for the thousands of students of Rebbe Akiva who passed away in a plague during Sefirat Ha’Omer.  Why do we celebrate the day Rebbe Shimon passed away as a holiday?  Why do thousands upon thousands of Jews travel to Meron in Northern Israel to pray by his gravesite and celebrate?  Why do Jews all over the world light bonfires?

In a special and interesting way, Rebbe Nachman opens his main book of teachings, Likutei Moharan, with a teaching about Rebbe Shimon Bar Yochai, hinting at the special connection which exists between the souls of these two tsaddikim and the teachings which they revealed.   Rebbe Nachman explains that Rebbe Shimon Bar Yochai promised that the Torah would not be forgotten through him, in his merit.  This is alluded to in a story in the Talmud, Tractate Shabbos.  When the Sages gathered together in the town of Yavne, the only place in the land of Israel where the Romans still permitted Jews to learn Torah in public, they declared in their discussion that in the future the Torah will be forgotten from the Jewish people.  They saw with their spiritual vision the length of the exile which had begun at that time and all of the sorrows which the Jewish people would suffer during the long years of exile.  Rebbe Shimon Bar Yochai, who was present at the gathering, replied to the other Sages that G-d forbid, the Torah will not be forgotten, as it says in the book of Devarim, “For it shall not be forgotten from the mouth of its offspring…” (Chapter 31, Verse 21) כי לא תשכח מפי זרעו.  Rebbe Shimon supported his words that the Torah would not be forgotten with this verse specifically, because the final letters of each word in the verse spell the name Yochai in Hebrew, יוחאי, who was the father of Rebbe Shimon.  Through the offspring of Rebbe Yochai, Rebbe Shimon, and his work, the Zohar, the Torah would not be forgotten.   Rebbe Nachman explains that it says in the Holy Zohar, authored by Rebbe Shimon Bar Yochai, that through his book they (the Jewish people) will leave the exile.  The light of the Holy Zohar will keep the Jewish people connected to the Torah during the long exile.  For most of his life, except for a small group of students, nobody knew that Rebbe Shimon was learning the secrets of the Torah.  On the day that Rebbe Shimon passed away, Lag B’Omer, he revealed to his students hidden secrets of the Torah.  The whole room became filled with light, and this is how he passed away.

However, we need to ask ourselves a question- how are the secrets of the Torah connected to me on my level?  What do they have to do with me?  Many of us have trouble understanding these deep teachings.

A tsaddik like Rebbe Shimon has tremendous power on the day of his passing to reach even higher spiritual heights and to sweeten any harsh decrees which might be upon the Jewish people.  The Sages said that a tsaddik is even more alive and present spiritually in the world after he passes away.  Furthermore, several Chassidic masters teach that the power of atonement of Yom Kippur is also happening for the Jewish people on Lag B’Omer, in a more hidden way.  Rebbe Shimon also reveals the secrets of the Torah to each person on their level.  He reveals to them how much Hashem loves them and wants each and every Jew to be close to him.  He reveals that this is truly the thing which we all want most in the world, a life of revealing our connection with Hashem in our own special way.  He shows us what our special path in this world is, and his light gives us the strength to keep walking on that path.  The special attribute of the day of Lag B’Omer is הוד שבהוד, glory of glory, and it is the week of Aharon the Cohen.  Each week of the Sefirat HaOmer is connected to the special attribute of one of the seven shepherds of the Jewish people, Avraham, Yitzchak, Yaakov, Moshe, Aharon, Yosef and David.  Rebbe Shimon too possessed the special attribute of Aharon, and he is able to shine the light of love into every person’s heart, especially on the day of his passing, just as Aharon brought love and peace between people in his time.

From my personal experience, almost every time I have traveled to Meron for Lag B’Omer or to Uman for Rosh Hashana, at some point along the way I think to myself, ‘what I am doing?’ I don’t want to go through dealing with the long hours of travel, the masses of people, the weather conditions, the lack of sleep, etc.’  But when I return I understand exactly why I went.  I feel inside renewed with the light of faith which these great Tsaddikim are shining to each person who comes to them to pray by them and seek their guidance.

The light of the fires on Lag B’Omer is the light of the Torah, the light of Hashem.   It represents our true will to serve Hashem and return to Hashem.  This light is in our souls, and it’s truly burning inside.  Lag B’Omer has the power to show each person that this is who we truly are- burning with love and good desires to come closer to Hashem and to live a life of helping others.  Rebbe Nachman said, ‘My fire will burn until the coming of the Messiah,’ he is continuing the path of Rebbe Shimon, revealing the fire of the Torah, the secrets of the Torah, in a way that each and every Jew can find their path to return to Hashem.  These tsaddikim light the fire inside of us which has always been there, it just became extinguished at some point in our lives, like a secret which becomes revealed.  Through their light we are able to begin to see our own light.  Happy Lag B’Omer!

(Inspired by a short class on Lag B’Omer given by Ohad Tennenbaum, a teacher at Shackuf, the workshop I used to learn at; and a class by Rav Shlomo Katz)

(The image is courteous of Chabad.org)

View all posts by mosheneveloff